Banksy: one of the most famous street artists of all time 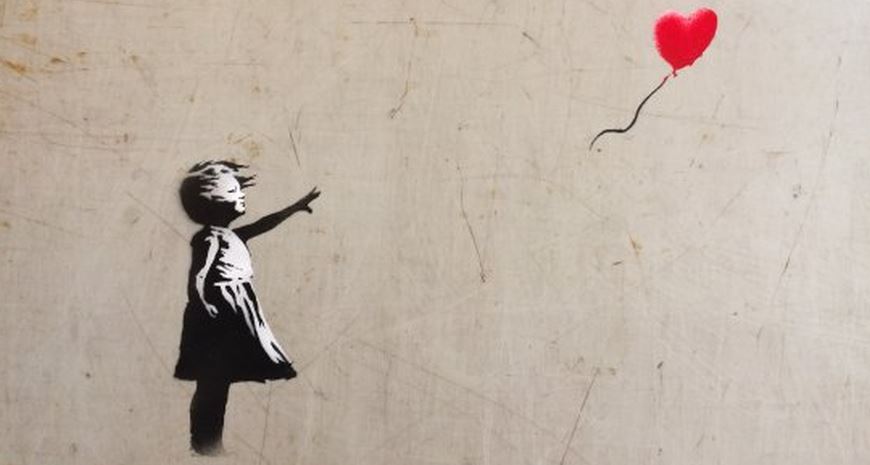 If there is one thing that the artistic community and its many fans agree on, it is that Banksy is a true genius of the street art movement. His exponential popularity is only reinforced by the mystery surrounding his work - no one knows who Banksy is! Let's follow his upward trajectory from the outlaw spray painter to one of the most famous street artists of all time who is known as an activist, filmmaker, graffiti artist and provocateur.

Banksy the king of street art: portrait and evolution of an invisible man

The story behind the spraying

Urban art is versatile, unclassifiable, accessible to the general public and ephemeral. This artistic movement brings together various media such as graffiti, mosaics and stencils. The British street artist Banksy became known for his stencils in the early 2000s. Although at the age of 18 he started free-handing graffiti and almost got caught. He said, “I realized I had to cut my painting time in half or give it up altogether.” Shortly after that incident he started experimenting with stencils.

In 2007, Banksy was awarded the prize for the best living British artist (Art's Greatest Living Briton) but in order to keep his identity a secret he did not attend the award ceremony. He refuses almost all interviews and works through the agency Pest Control in order to communicate and authenticate real Banksy artwork. A year later he created Keep it Spotless in collaboration with Damien Hirst, which sold for $1.7 million at Sotheby's. Banksy is now considered to be one of the most important and famous contemporary street artists. Banksy truly became a street artist when he started creating graffiti with a group from his hometown of Bristol called the DryBreadZ Crew. Banksy has openly stated that his work was greatly inspired by the famous French street artist, Xavier Prou, AKA Blek le Rat, who is famous for spray-painting rats on buildings using stencils.

A question with no answer

Who is Banksy, the famous street artist?

Very little information is known about the artist behind the pseudonym Banksy. He was presumably born in 1974 in Bristol, England, the cradle of trip-hop music, which appeared in the early 1990s. A persistent rumour is that Banksy is actually the singer Robert del Naja from the group Massive Attack. A journalist reportedly established a correlation between the dates and places the group visited on tour and the simultaneous appearance of Banksy's work. A conflicting relationship with the art market

Banksy’s street art is engaging, controversial and thought provoking. He is also known for his uncompromising stance towards the art market and its financial component.

Banksy never sells his works through private art galleries and his subversive exploits go much further. In 2004, for example, he printed and distributed counterfeit 10-pound bills bearing the image of Princess Diana. These were marked “Banksy of England!” In 2013, in order to denounce the absurdity of the art market and the staggering prices of certain pieces, he sold about twenty original works to an American who put them on sale at a stall in Central Park for 60 dollars each, but only a few paintings sold. Banksy stated, "I know street art can feel increasingly like the marketing wing of an art career, so I wanted to make some art without the price tag attached.”

In October 2018, Banksy made headlines again at an auction held at Sotheby's in London. In front of a stunned audience, the piece entitled Girl with Balloon partially self-destructed. The piece had just sold for $1.4 million!

Considered Britain’s favorite piece, this graffiti was made using a stencil. It shows a little girl letting a red heart-shaped balloon fly away. Its first street art version appeared for the first time in 2002 in London on a South Bank bridge.

Banksy opened an amusement park called Dismaland for five weeks in 2015. Visitors could stroll in front of a merry-go-round of wooden horses that had been taken over by a serial killer. They could also see Cinderella dead after a carriage accident. 150,000 visitors were delighted, praising this contemporary artist’s non-conformist vision. The visitors felt the art truly represented conceptual ideas that are close to Banksy’s heart. His work will forever be known for its bold approach and ability to meld street-fighting passion and pacifist ardor. Banksy's epic story is still in the making. The upcoming locations of his street art remain undisclosed. Somewhere the next Banksy awaits discovery. However he recently launched an e-shop that is creating a buzz. He only sells his limited edition pieces to fans that write to him answering the question, "Is art important?"

Artalistic does not only bring you engaging bi-monthly news about the art world, it is redefining the digital experience of buying and selling art - paintings, drawings, sculptures and photography - by making it easy, convenient and welcoming for professional collectors, artists and the general public.

The art of giving art: 5 essential tips for buying art as a gift
FIAC 2019: Paris’ leading art fair for a new generation of art buyers