10 most famous photos of all time 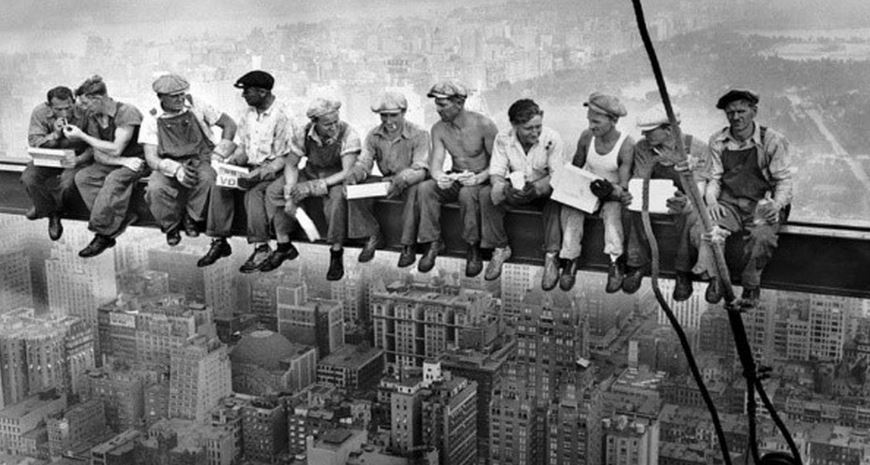 Photography was invented nearly two hundred years ago. Ever since, its capacity to capture moments has continued to amaze and has propelled the medium to the forefront of the art world. Artalistic has curated a selection of ten of the most famous photos ever taken.

10 most famous photos of all time: Artalistic’s curated selection

View from the Window at Gras - Joseph Nicéphore Niépce, 1827 This is the very first photograph ever taken. The scientist Nicéphore Niépce (1765-1833) was enthralled by the burgeoning craze for Lithography and decided to place polished pewter plates coated with a light sensitive chemical called bitumen of Judea inside a camera obscura. Niépce took this famous picture from his house in Saône-et-Loire. The exposure took eight hours. Once the plate was removed from the camera he used a mixture of lavender oil and white petroleum to develop the image. The French photographer Henri Cartier-Bresson took this famous photo behind the Saint-Lazare train station in Paris. Cartier-Bresson is known for coining the term “the decisive moment,” which refers to a photographer’s capacity to capture a subject at precisely the right instant and in doing so shattering normal life to retrieve a transcendent moment. The man jumping over the water can be compared to a dancer whose silhouette is reflected most gracefully in a puddle. An enigmatic, grey background juxtaposes this elegant figure. The image also perfectly reflects Roland Barthes’ theory about the punctum and stadium, which he explains in his book Camera Lucida: Reflections on Photography (1980). In this seminal book he defines punctum as the features of a photograph that produce or convey a meaning without invoking any recognizable symbolic system. This kind of meaning is unique to the response of the individual viewer of the image. The punctum punctuates the stadium - historical, social or cultural meanings extracted via semiotic analysis - and as a result pierces its viewer. To allow the punctum effect, the viewer must repudiate all knowledge. Barthes insists that the punctum is not simply the sum of desires projected into the photograph. Instead, it arises from details that are unintended or uncontrolled by the photographer, namely the detail that attracts the eye and the general impression that emanates from a photograph. We don’t know the names of the subjects in this famous photo or the name of the photographer. This image of workers taking a daredevil’s lunch break at the top of a skyscraper certainly makes the viewer dizzy but it also brings their attention to the very risky life the workers building the Rockefeller Center lead. In the first half of the 20th century, dozens of workers died after fatal falls during the construction of various skyscrapers. In the aftermath of World War II, Alfred Eisenstaedt took to the streets of New York's Time Square to immortalize celebrations marking the end of the war. This is one of the most famous photos of the 20th century; however while some critics believe it to be capturing a loving reunion between a sailor and a nurse others see it as sexual assault. The latter interpretation resonates with the present day #MeToo movement. Margaret Bourke-White, an iconic female photographer from the 20th century, immortalized Gandhi several times and is well known for this famous photo that was taken two years before his death. This picture was first published in the American magazine Life. After Gandhi's assassination, on January 30, 1948, Bourke-White’s photographs of Gandhi skyrocketed in price and took an important place in art history. On June 11, 1963, in a street in Saigon, Vietnam, the monk Thich Quang Duc immolated himself as an act of protest over discrimination toward Buddhists by the South Vietnamese government. During a demonstration, he asked to be doused with gasoline and demanded that he be set on fire. Associated Press photographer Malcolm Browne was on the scene at the time and captured a stunning image, a world-famous photo that also won a Pulitzer Prize. The American fusion-rap band Rage Against The Machine used it for the cover of their 1992 self-titled album. The Vietnamese photographer Nick Ut captured this chilling photograph on June 8, 1972. During the Vietnam conflict, the American army often used napalm during their missions, however this time one of the planes mistakenly hit the village of Trang Bang, wounding many civilians. Nick Ut brought the 9-year-old girl in this photograph to an American hospital where she was saved. After 17 skin grafts, the young girl went on to live a full life and even had two children. Steve McCurry took this famous photograph during a trip to Afghanistan in 1984 to document the migration of Afghan refugees. This picture of 17-year-old Sharbat Gula was taken in the refugee camp of Nasir Bagh. It became the symbol of the Afghan struggle and was featured on the front page of the National Geographic newspaper in June 1985. This famous photo of a young Chinese man standing in front of tanks during the 1989 Tiananmen Square uprising made Jeff Widener the most famous photojournalist of the late 20th century. The day before taking this photograph Widener had been injured by a stone and was told to stay in his hotel, while all the other American and European journalists took refuge at the airport. Widener took the opportunity to photograph the uprising from his hotel window. He ran out of film and asked an Australian tourist staying in the hotel to borrow a roll of film. Widener used this roll to take this famous photograph, which is now widely held to be one of the most recognized photos ever taken and won the Pulitzer Prize in 1990.

Death at the Gates of Paradise - Javier Bauluz, 2000 Javier Bauluz was awarded the Pulitzer Prize for this famous photograph, which underlines the large disparity between social classes in the world. This image depicts two tourists passively sitting in front of the lifeless body of a migrant who was trying to reach Europe.

We hope that you enjoyed our selection of the 10 most famous photos of all time. Feel free to browse our curated collection of photographs, paintings, sculptures, drawings and limited edition prints. Thank you and see you soon for the latest news from the art world.